skip to main | skip to sidebar

Cockroaches, Bureaucrats, and Other Things That Need Stepping On

To most folks, Zachary Christie looks like a nice 6-year-old boy. 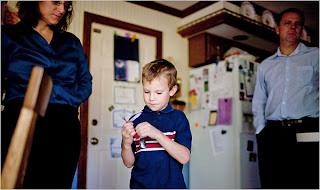 But to the perceptive and highly-trained personnel of the Christina School District in Delaware, he looks more like public enemy no. 1: 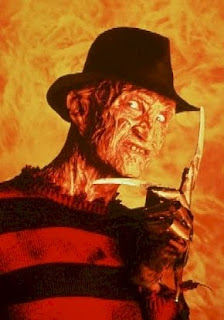 Young Zachary did something so heinous, it took the brave men and women of the Christie School District to save us all.  You see, Zachary brought this to school: 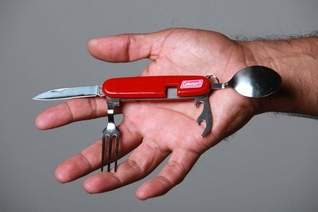 And that was all the ever-vigilant public servants needed to sentence young Zachary to 45 days in reform school.

Just who's the public enemy?

Here's the story (follow the link) courtesy of the NY Times.  And here is the web site his parents set up to plead for help.

"Zero-tolerance"? Of what? Common sense? Good folks of the Christina School District, here's a clue: if the NY Times is rubbing its eyes in disbelief, it's time to undo the lobotomy.

Don Surber sees it as a "war on scouts."

Glenn Reynolds (the Instapudit) thinks "the excuses offered for this piece of idiocy are even more damning than the idiocy itself."

What do I think?  It's just another day on another battlefield in our inexorable march toward tyranny.  But the good news is the people still have enough power to set the powers-that-be back on their heels.  Zachary's ordeal has a happy ending:  the school board, under the glare of publicity, reprieved Zachary and let him back into school.

It's nice to know our public servants can indeed do the right thing when watched constantly and cornered like rats.

But there are stories very similar to this all over the country in which the ending is not quite so happy.  The NYT article mentions "a third-grade girl [who] was expelled for a year because her grandmother had sent a birthday cake to school, along with a knife to cut it. The teacher called the principal — but not before using the knife to cut and serve the cake."  In New York, an Eagle scout was suspended for twenty days for having a two-inch pocket knife in his car.

When I was in high school, the knife would have been taken away and given back at the end of the year, end of story.

Overbearing, overreaching bureaucrats are like cockroaches:  they do their damage in the dark and scatter when the light shines on them.  And that's our job as American citizens: to shine that light.  When the idiocy threshold is reached and common sense refuses to kick in, it's time for us to do the kicking.

I stumbled onto this column a couple of years ago by Mike S. Adams, at TownHall.com. Professor Adams teaches criminology at the University of North Carolina, Wilmington, about four hours south of where I live, in Virginia Beach.

It's one of my favorite columns of all time. It's about the inflated sense of entitlement felt by many, if not most, in my generation (born in 1954, I'm sort of in the final wave of the "Baby Boomers").

As my buddy Ray from South Carolina tells me: "Insofar as parenting is concerned, the report card is in: our generation has earned an 'F'."

Our parents, I believe, taught us manners and rules. What they did not teach was why we ought to conform to them. I believe they understood why, but could not articulate the real issue.

The reason we have manners, and politeness, and rules, and so forth, is out of respect for other people. There. It's not complicated.

My generation grew up largely to believe that the conventions of our parents were "old-fashioned" and "phony". The media and the entertainment establishment flattered us into believing we were America's greatest generation, so much smarter and more idealistic than our parents. What did we do to deserve such accolades? Nothing. What did our parents do to deserve such insults? Nothing, except win a fight to the death against two horrible fascistic regimes and suffer through an agonizing twelve-year economic Depression, determined that we, their children, would not have to suffer as they did.

The result is we, the Boomers, grew up with the largest, most metastasized sense of entitlement of any generation in history. I've said it before, I'll say it again: the opposite of a sense of entitlement is gratitude. Christianity teaches that gratitude is the proper attitude of a Christian, who knows he deserves nothing but God's condemnation, but is saved by faith through grace.

But, flaws and all, my generation is the one now running things. The kids who used to say, "Never trust anyone over thirty," are now in their fifties and sixties.

I hope and pray, through some miracle of the Lord's, that our children turn out better than we did.

The GOP: Enablers of Liberalism

Michelle Malkin is on top of the latest Republican-organized sell-out of conservatives.  Sen. Lindsey Graham (R-SC)  appears poised to sign on to the "Cap'N Tax" scheme proposed by the liberals.

If you're a Republican, and liberal Democrats -- who have the Presidency and control of both houses of Congress -- are desperate to find Republicans to sign onto their craziness, what does that tell you?  It tells me that they are afraid Republicans will use their craziness as an issue; they wish to nullify it by donning the cloak of "bipartisanship" -- a code word meaning liberals win, conservatives lose.

I've written about the phenomenon of back-stabbing Republicans before.  Here, and here.

Go poke around at the Republican National Committee web site, if you want to read some inflammatory conservative viewpoints.  It's as if Rush Limbaugh writes their material.  Republicans know who send them money.  They know who man the phones and the booths.  They know who get out and vote. Conservatives, that's who.

But do not infer from the GOP's conservative talk that they are willing to perform conservative deeds.  When push comes to shove, the Democrats will shove them around, and they will in turn shove conservatives around.  I'm so old, I remember when Lindsey Graham was a conservative.  Then, he started hanging around John McCain, and the next thing you know he was calling conservatives a bunch of bigots for opposing Bush's Illegal Alien Amnesty Act, referred to in the mainstream media as "Immigration Reform."

In the case of cap-and-trade, we could accurately call it the "2009 Unemployment and Economic Tailspin Act", as if we didn't already have enough of that.  But it is being sold as emissions and environmental "reform."  It will become "change you can believe in" as soon as they take your dollars and give you back a couple of coins.

The GOP plays the same game every election year.  Talk conservative, gather conservative money, accept conservative votes, and then cave in to liberals.  But with the GOP completely powerless, grass-roots conservatives are doing a better job than Republicans ever did at standing up to the liberal machine, with their tea parties and marches and town hall meetings.

My pledge is this:  Not one red penny.  Not one red cent of my money goes to the Republican National Committee; they will spend it on GOP insiders, "moderates" and "RINOs" all.  (RINO = Republican in Name Only).  We will gladly send money directly to candidates we believe to be legitimate conservatives, whether they are Republican or third-party.  We've tried everything we know to interest the GOP into fighting hard for conservative ideas.  Nothing else has worked, so let's try starving them until they get the message, or until a viable third party forms and we no longer need them.

How to Avoid a Foolish Consistency

It's time for a quiz on American mainstream journalism. Ready?

Who wrote the following?


"There is a lot of good news in the latest intelligence assessment about Iran. Tehran, we are now told, halted its secret nuclear weapons program in 2003, which means that President Bush has absolutely no excuse for going to war against Iran. We are also relieved that the intelligence community is now willing to question its own assumptions and challenge the White House's fevered rhetoric. The president and his aides are apparently too worried about getting caught again shaving intelligence to stop that. . . . We don't know if the Iranians will find any offer [of high-level diplomacy] credible, or if they even want to. It is the least Mr. Bush can do to try to salvage his credibility with the American people and America's allies."


Hands are waving. Why, that was easy: it's from an editorial published by the Grey Lady herself, the New York Times -- you know, "All the news that's fit to print," the gold standard of journalism, "the newspaper of record"... you get the drift. Published on Dec 5, 2007.

Ready for another one? Who wrote this one?

"Iran has a long history of lying and cheating about its nuclear program, so the news that it has been secretly building another plant to manufacture nuclear fuel is hardly a shock. But it provides one more compelling reason (are any more needed?) why the United States and other major powers must be ready to quickly adopt--and enforce--tough new sanctions if negotiations fail to persuade Tehran to abandon its nuclear ambitions."

Believe it or not, again, that was from an editorial published by the Grey Lady herself, the New York Times -- you know, "All the news that's fit to print," the gold standard of journalism, "the newspaper of record"... yep. Those guys again. Published Sep 26, 2009.

Confused? You shouldn't be.

What was that observation about "double standards" again? Goes like this: behind every apparent double standard lurks an unacknowledged single standard.

So, in this instance, what could that single standard possibly be? What changed between 2007 and 2009? Can you think of anything? Hmmm?

Perhaps the most important thing that has changed is, well, the fellow and the political party who control the federal government. That was some change, I guess. Enough so, that what was once "fevered rhetoric" has now become a "compelling reason."

Liberal journalists like to protest that the mainstream media is objective, unbiased, balanced, impartial, etc. -- to which I say, baloney. But now I have to admit, you can indeed get both sides of the story from the New York Times.

All you have to do is wait for America to elect someone they happen to like.

Ralph Waldo Emerson once wrote, "A foolish consistency is the hobgoblin of little minds." But how much consistency does it take to cross the threshold into foolishness? Hard to say -- Emerson didn't specify. It may require quite a lot. But, as I'm sure the NYT editorial board would agree, why take any chances?

(Hat tip: James Taranto at the Wall Street Journal's "Best of the Web.")